One (Token) Ring to Rule Them All 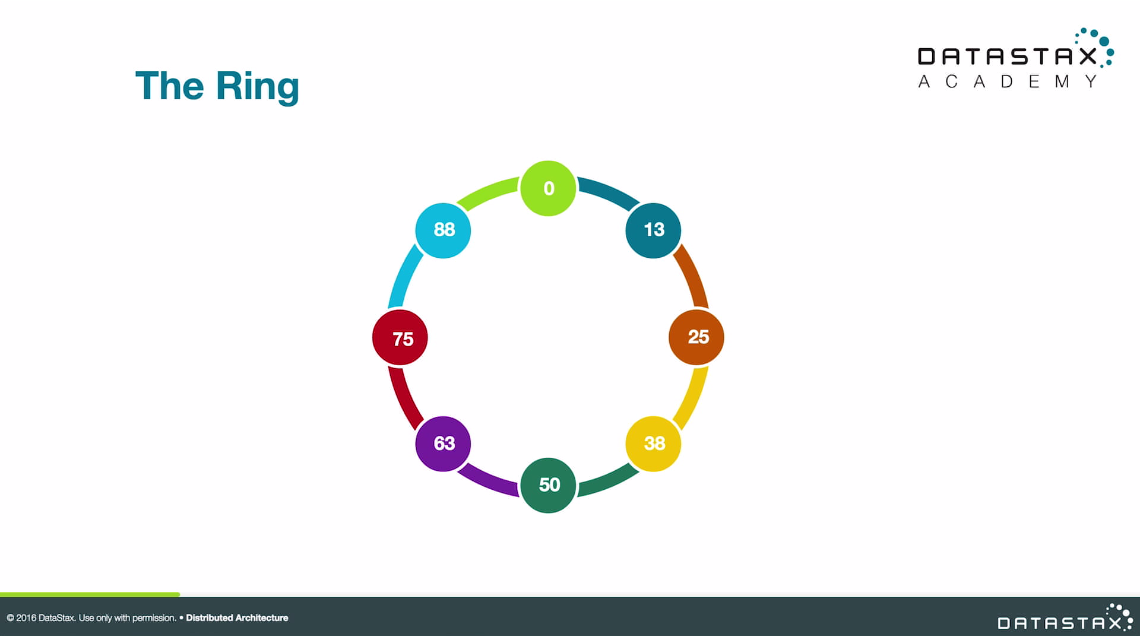 For newcomers to Cassandra, all the terminology can be a little overwhelming at first. If you have experience with relational databases, some concepts like a "Row" or a "Primary Key" will be familiar. But other terms that seem straightforward can often be a little confusing, especially when paired with some of the visuals you see when learning about Cassandra.

For example, take a look at this screenshot from the DataStax OpsCenter management tool: 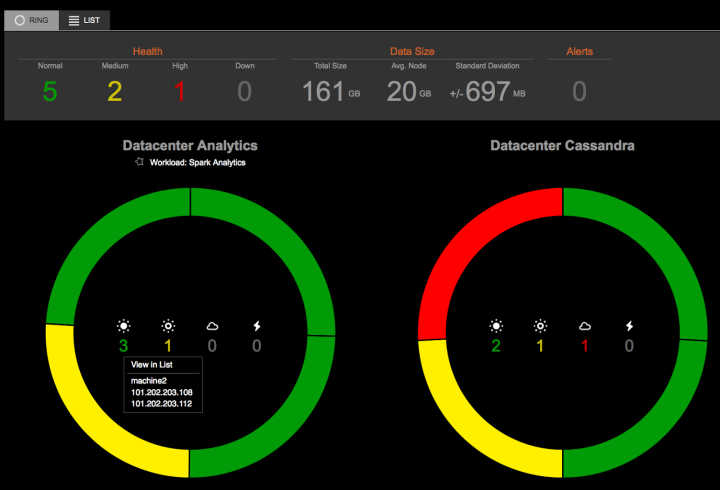 How about this slide that I use when introducing new users to Cassandra:

In case you're wondering, yes, your data actually is "coming to America" in that diagram (pun fully intended). Now answer those same questions:

Did you answer two for all the questions in both pictures? If you did, you wouldn't be alone, but you also wouldn't be correct either. This is one example where the terminology can get a little confusing. Let's walk through those terms, starting with the last one and working our way backwards.

This is the term that most people are familiar with before starting with Cassandra and if you answered two to the question above then you're not only correct, but well on your way to understanding this concept. In the computing world, we tend to think of a datacenter as a physical place where our computers reside. The same can be true for a datacenter in Cassandra, but it doesn't necessarily have to be true.

In Cassandra, a datacenter is just a logical grouping of nodes. This grouping could be based on the physical location of your nodes. For example, we might have a us-east and a us-west datacenter. But it could also be based on something other than physical location. For example, we might set up a transactional and an analytics datacenter to run different types of workloads, but the nodes for those datacenters might be physically in the same location.

So how does Cassandra know which nodes belong to which datacenter? Well that's a little outside the scope of this post, but the short answer is a component in Cassandra called a Snitch. If you want to dig in more, there's a great explanation of the Snitch on DataStax Academy.

Most of the time when we're looking at visual depictions of Cassandra like in OpsCenter or my slide above, the nodes are being shown grouped by data center.

If you answered two for this question, I don't blame you. After all in English, cluster is defined as "a group of things or people that are close together" and in both of those pictures, it sure looks like there are two separate groups of nodes that are close together. But as we just established, most of the time when we see pictures like those we're seeing nodes grouped by datacenter.

That leaves us with the question about the number of token rings. I tried to be specific by asking about token rings instead of just rings. Oftentimes in Cassandra, the term "ring" (by itself) is used interchangeably with "cluster" to refer to all the nodes across all the datacenters. But when we say token ring we're usually referring to a specific concept in Cassandra--data distribution.

If you've been working with Cassandra then you know by now that when you create a table, you choose a Primary Key. Part of that Primary Key (usually the first column or sometimes the first group of columns) is called the Partition Key. For example, take a look at the users table from KillrVideo:

Here, the partition key is the userid column. When we insert data into that table, the value for userid is used to determine which nodes in Cassandra will actually store the data. Choosing a Primary Key is important but what does this have to do with token rings?

So for example, let's pretend we have a hashing function that outputs tokens from 0 to 99. The distribution of those tokens across all the nodes in an eight node cluster might look something like this:

Now this is a really simplified example because of the small range of tokens available. In real Cassandra deployments, most people stick with the default Murmur3 partitioner which outputs tokens in the range of -263 to 263 - 1, but even with the larger range available, the principle is the same.

This can be really hard to wrap your brain around, especially when you see pictures like the two above. In those pictures, there are definitely two "rings" in the English sense of the word. But in Cassandra terms there's only one token ring (and only one "ring" if we're using that term interchangeably with "cluster"), even if the nodes are grouped and displayed as two datacenters.

If you're struggling with some of the terminology when getting started with Cassandra, hopefully this helps to clear some things up. I highly recommend checking out DS201: Foundations of Apache Cassandra on DataStax Academy for a deeper dive into many of these concepts. Things like replication (and replication strategies) are all built on top of this foundation, so understanding these concepts can go a long way towards becoming a Cassandra guru.

Note This blog post originally appeared on Planet Cassandra in April 2016 before that site was donated to the Apache Foundation and all the content was removed. I've reposted it here to preserve the content.