Welcome to Lesson Seven ‘Cassandra Advanced Architecture and Cluster Management’ of the Apache Cassandra Certification Course. This lesson will cover the advanced architecture of Cassandra and cluster management in Cassandra.

Let us begin with the objectives of this lesson.

After completing this lesson on Cassandra Advanced Architecture and Cluster Management, you will be able to:

In the next section, let us understand Partitioning.

Cassandra uses partitioners to distribute data evenly across cluster nodes. A partition key is used for data partitioning. It can be a single column or multiple columns.

Three types of partitioners are available in Cassandra:

The partitioner is specified in the cassandra.yaml file.

In the next section, let us understand Murmur3Partitioner.

The Murmur3Partitioner is currently the default partitioner in Cassandra.

Some of the features of this partitioner are:

Let us focus on RandomPartitioner in the next section.

The RandomPartitioner was the default partitioner in earlier versions of Cassandra. It is similar to the Murmur3Partitioner except that it uses the MD5 or message-digest version 5 hash function to calculate the hash value.

MD5 is a widely-used cryptographic hash function that produces a 128-bit hash value based on the key. It is considered cryptographic because it performs a one-way encryption.

Let us focus on ByteOrderedPartitioner in the next section.

Some of the features of The ByteOrderedPartitioner are:

Let us focus on Replication of Data in the next section. 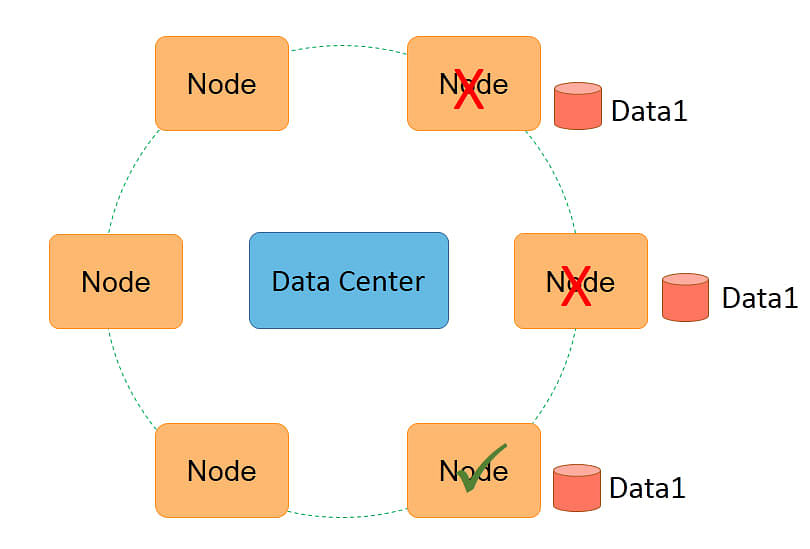 When a machine that has a data replica fails, Cassandra will automatically try to create a replica on another machine so that the replication count is brought back to three. There is a chance of data loss only if all three machines fail simultaneously.

This is a very low probability. Therefore, the presence of three replicas provides good fault tolerance even with commodity-type hardware.

Let us focus on Replication Strategy in the next section.

The replication strategy determines how multiple replicas of a data row are maintained. Replication is specified at the keyspace level, and different keyspaces can have different strategies.

The replication strategy is specified during the creation of a keyspace. The strategy for a keyspace cannot be modified, but the number of replicas can be modified.

In the next section, let us focus on SimpleStrategy.

SimpleStrategy is the replication strategy for single-rack clusters. It is used within a data center and is suitable for test or development clusters. 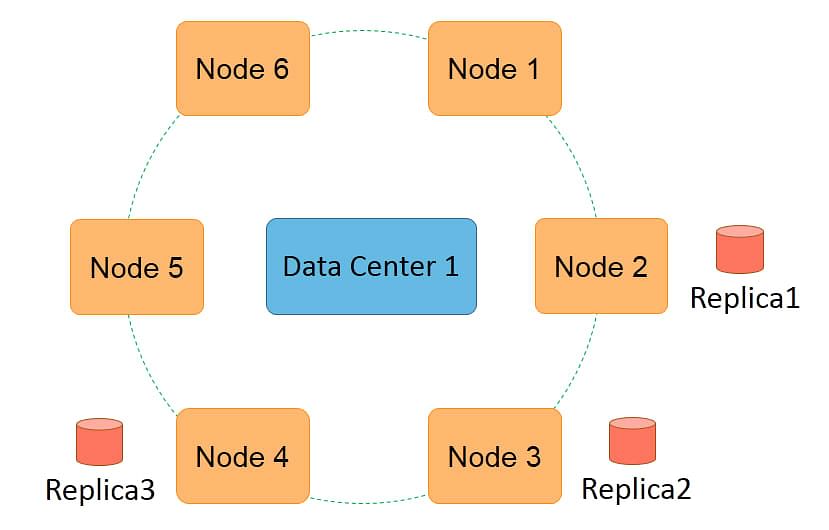 In this replication strategy, the first copy is stored according to the partitioner.

The second copy is placed on the node adjacent to where the first copy was placed.

The third copy is placed on the node adjacent to the second node, and this proceeds in a clockwise direction.

The replication factor is specified as an option and informs how many replicas need to be maintained. The statements show the creation of a keyspace called testDB with SimpleStrategy for replication. They specify the replication factor as three. This means Cassandra will try to keep three copies of each data row in the keyspace testDB.

In the next section, let us focus on NetworkTopologyStrategy.

NetworkTopologyStrategy is used for multi-rack data centers and is suitable for production clusters and multi-data center clusters.

In this strategy, the number of replicas in each data center can be specified while creating the keyspace. Replicas are placed on different racks within a data center.

Similar to SimpleStrategy, NetworkTopologyStrategy decides the first node based on the partitioner. Subsequent replicas are placed by checking for a different rack in the ring, in a clockwise direction.

The statements show the creation of a keyspace called testDB with NetworkTopologyStrategy. 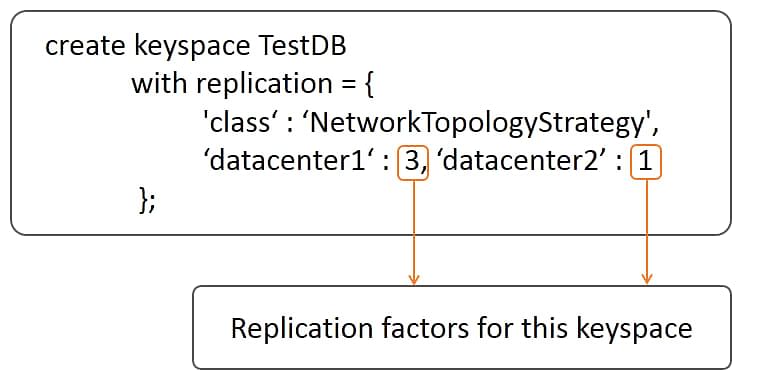 The presence of multiple replicas in NetworkTopologyStrategy ensures two things.

Second, it facilitates data locality. Accessing data in the same node is faster. Therefore, even if one node is busy, you can find another node where the data is local.

Let us look into the Replication Example in the next section.

Let us discuss an example of replication with NetworkTopologyStrategy.

The first copy is placed on node 1 as determined by the partitioner.

The second copy is placed on node 4 as it is present on a different rack while moving clockwise in the ring from node 1.

The third copy is placed on node 6 as it is present on a different rack, rack 3. Node 6 is present after node 4 while moving clockwise on the ring. This completes the allocation of three copies for data center 1.

The fourth copy is placed on node 8 in data center 2 as determined by the partitioner.

In the next section, let us learn about Tunable Consistency.

In Cassandra, consistency can be specified for each read and write operation. One is the default consistency and is specified in the configuration file.

A quorum of replicas is considered for some consistency levels.

A quorum of replicas signifies a quantity greater than 50% of the replicas. This constitutes a majority of replicas. For a replication count of five, a quorum refers to having at least three replicas.

In the next section, let us learn about Read Consistency.

The following are the descriptions of the different levels of consistency that can be specified for a read operation:

When multiple replicas are received, the replica with the most recent timestamp is returned as the result of the read.

In the statements given below, a consistency level of LOCAL_QUORUM is set in cqlsh, and a read is executed using the SELECT statement.

Select * from stocks where ticker = ‘ABC’;

The SELECT statement will fail on the VM because the replication count has been set to three, in which case, a quorum is two replicas. However, data is present on only one node.

In the next section, let us learn about Write Consistency.

The following are the descriptions of the different levels of consistency that can be specified for a write operation:

The write consistency applies to insert, update, and delete operations.

In the given statements, a consistency level of ANY is specified in cqlsh, and a write is executed with an UPDATE command. This will return immediately after writing to the commitlog.

In the next section, let us learn about Read or Write failure.

Read and write operations will fail if a certain consistency level cannot be achieved due to node failure.

Node failure will occur in one of the following cases:

In a single node cluster with a replication factor of three, any consistency level other than ONE or ANY will fail as shown.

In the given set of statements, a consistency level of LOCAL_QUORUM is set in cqlsh, and an UPDATE statement is executed.

In the VM, this fails with the message as shown since the local quorum is two replicas.

In the next section, let us learn about Hinted Handoff. 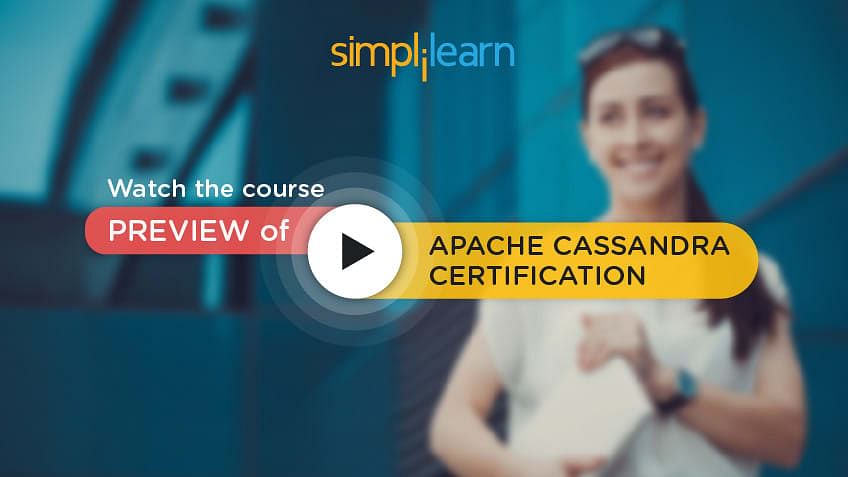 Hinted handoff is used during data writes in Cassandra when one of the nodes to write to is down.

The process is as follows:

In the next section, let us focus on Time to live.

Data is removed when the data expires and is made null. The row, however, is not deleted. In the given statements, the value column is updated in the Stocks table using the time to live for one day.

Note that 86400 seconds represents the number of seconds in 24 hours. This data will be removed immediately after 24 hours.

In the next section, let us learn about Tombstones.

In Cassandra, distributed deletes can cause anomalies when the consistency level is reduced. To overcome this, deletes are handled in the following manner:

In the given statements, a consistency level of one is set in cqlsh, and a DELETE statement is executed.

The statement returns the moment one replica is deleted, but a tombstone is created so that a subsequent read or write will know that this data has been deleted.

In the next section, let us learn about Monitoring the Cluster.

Cassandra is highly fault tolerant, so an administrator needs less effort to monitor the cluster.

The following are a couple of utilities available to monitor the cluster:

- monitor the cluster through a graphical interface from one’s browser.

- add nodes to the cluster.

In the diagram, a nodetool utility is run on a VM, and the status of one node in the cluster is shown.

You can also see that the node is up and running normally. Further, you can see the node’s address and load on the node.

In the next section, let us learn about Nodetool Options.

The table shows various options for the nodetool utility along with their descriptions. You can view all the options using the command ‘nodetool help.’

With a few simple steps, you can install and configure OpsCenter from DataStax to monitor and administer the cluster.

To install OpsCenter on the VM, execute the given commands. 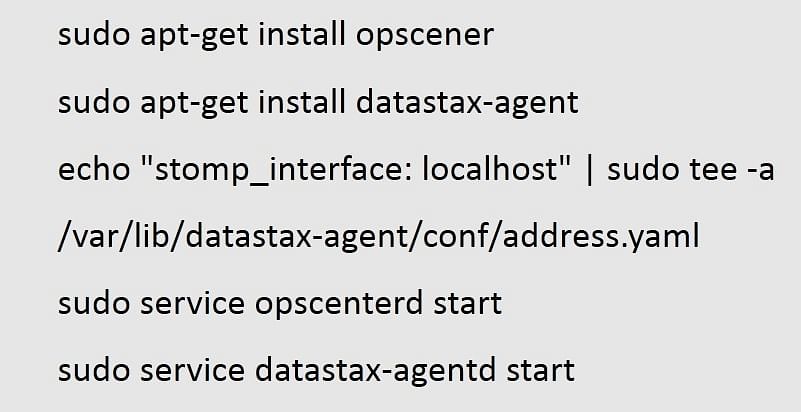 In the next section, let us focus on Monitoring with OpsCenter.

You can see cluster-, node-, and activity-level information and information on each node in the cluster. You can also use administration screens to add nodes to the cluster.

The following image shows the initial screen of the OpsCenter. 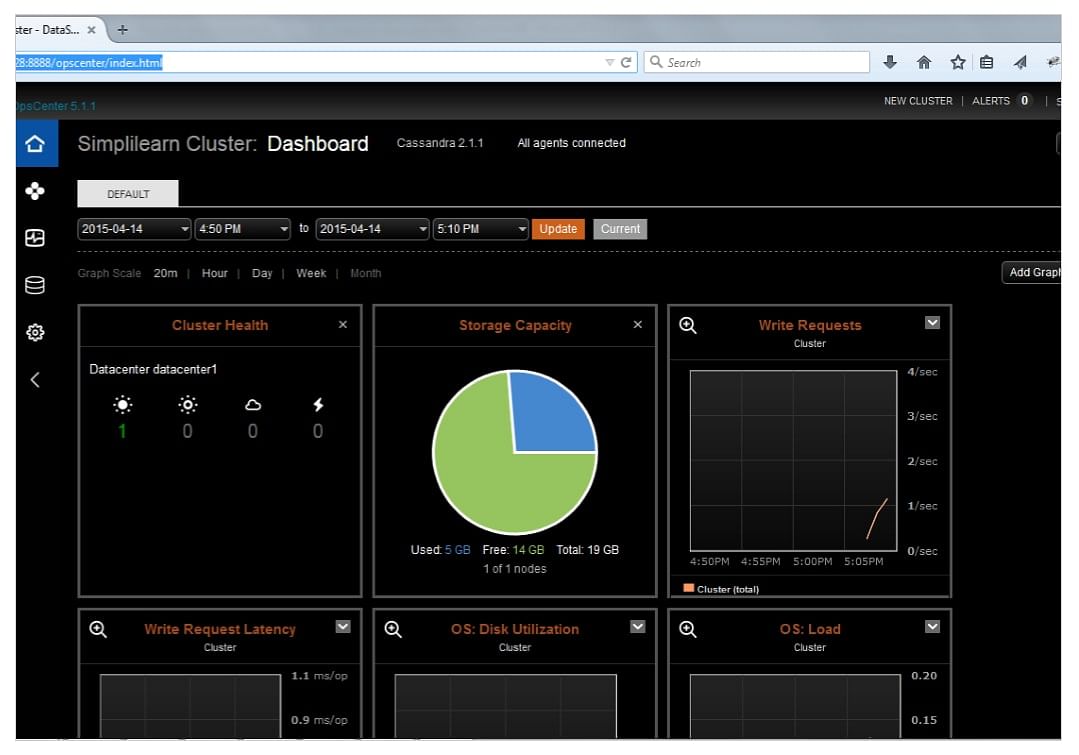 It displays a dashboard with various graphs that show the status of the cluster. There are graphs on Cluster Health, Storage Capacity, Write Requests, Write Request Latency, Disk Utilization at the operating system level, and the load on the OS. 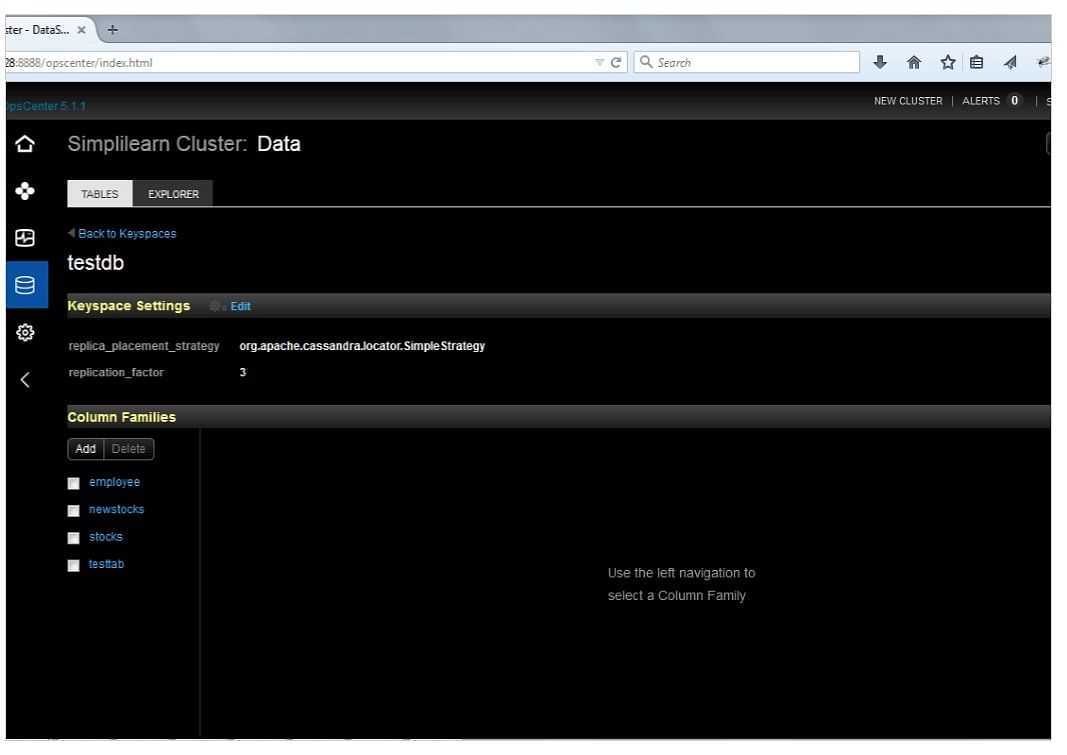 You can click on the database icon on the left to view the keyspace and user keyspace information. You can expand the keyspace to look at the tables in it. Tables are shown under the heading ‘Column Families.’

The diagram shows a screenshot of the OpsCenter screen where the database is selected, and the information about the keyspace testDB is displayed.

The diagram also shows the replication settings for keyspace testDB and also lists the tables under the heading ‘Column Families.’ Remember that Cassandra sometimes uses the term ‘column families’ for tables.

In the next section, let us learn about Administer using OpsCenter.

The OpsCenter can be used to administer the cluster in various ways.

You can use cluster actions->Add Nodes to add a node.

Additional configuration can also be done here. Finally, click on Add Nodes to start the installation.

The image below shows the Add Nodes screen where you can specify the address of the nodes to be added and the information, as mentioned earlier. 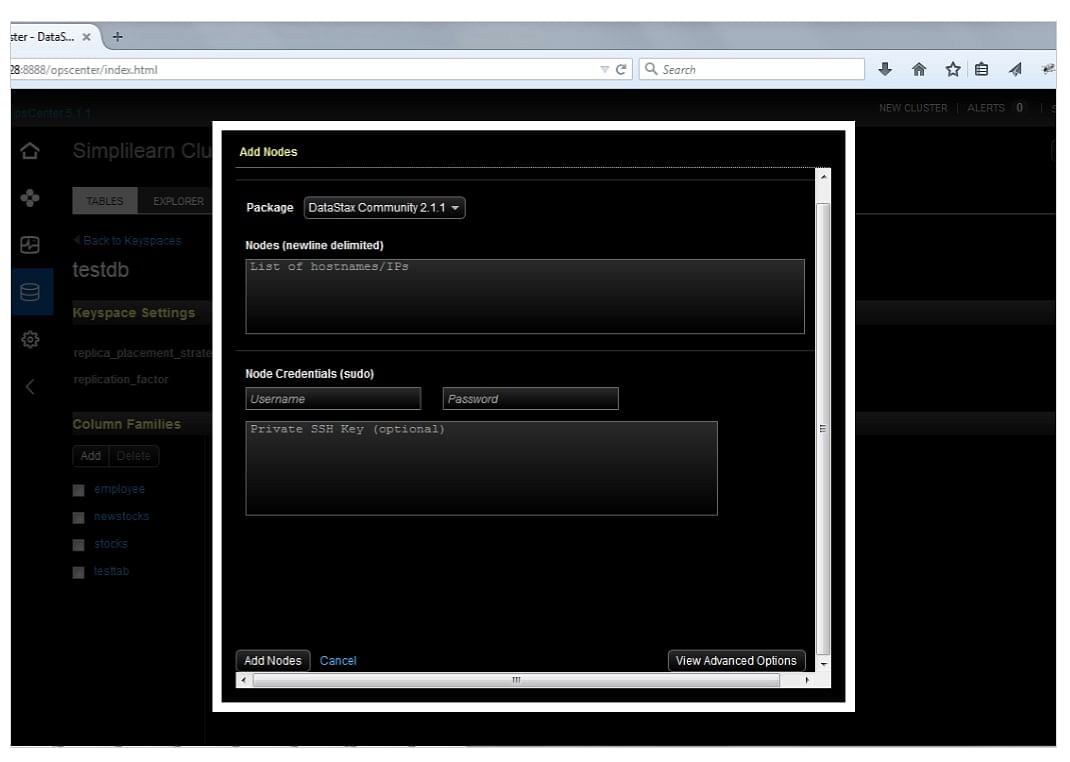 It also shows the Add Nodes and Cancel options at the bottom of the screen.

Let us summarize the topics covered in this lesson.

This concludes the lesson ‘Cassandra Advanced Architecture and Cluster Management.’ In the next lesson, we will learn about the Hadoop Ecosystem around Cassandra.